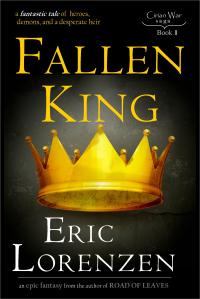 In the land of Na Ciria, an ancient enemy has returned.  As the clouds of the Dragon Shadow swallow more of the sky, those who stand against the invasion are few:

A PRINCE ABOUT TO LOSE HIS REALM

Grizzled and weary, Prince Wintron Dabe, longtime heir to the throne, inherits a kingdom on the same day that most of it falls under demonic invaders.

A PRAYER WARRIOR STRUGGLING TO FIND HIS POWERS

Young Afral must face his heritage and his uncertain abilities.  He flees those who want to capture him, while trying to reach a people who may reject him.

A WATCH RIDER FACING BETRAYAL BY SOMEONE SHE TRUSTS

Determined Mylana Farsight must lead other Watch Riders on a dangerous mission to warn the land’s long-hidden defenders. Dreadhounds pursue her, even as a traitor seeks to learn her secret.

FALLEN KING. This epic fantasy by Eric Lorenzen introduces you to three heroes as they fight against an evil invading their land.